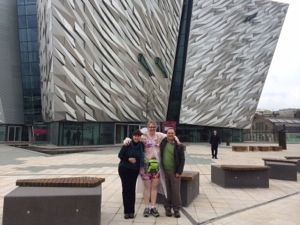 There has been curiosity as to why I actually started in Belfast, when Dublin would have equally gotten the message across.

Well, it’s a very personal reason (and I apologise to other Irish cities in advance) – Belfast is my favourite city in Ireland (ouch – stop that stoning please!!)

The other reason is that now that I am officially Irish, I can cross the border “legally”.

What I have loved about Belfast since the very first visit is the tangible history embedded in every nook and cranny. This is not an old history, and the undercurrents of the political strifes are still very evident, but at least it is real.

The Titanic Centre is amazing, the walk up Shankill, and then through the storm gates down to Falls Road is like walking in time with history, rather than reading it in a book.

The Europa Hotel, the Crowne Bar, the Linen Library, and the list goes on. Most importantly the Taxi Tours are a must – but you have to do both a Protestant and Catholic one to get full perspective. The respect within the taxi tourism community is something I think many can learn from. Civility, some safety words but most importantly a mutual respect for each other’s turf.

Not an agreement, just a respect and understanding that everyone is different, but deserve their space.

So when we parked in front of the Titanic Centre today – may I add ON THE TAXI RANK as a man kept on reminding us (where is their sense of charity…. sinking! whahahahaha) – we had a car park behind us and in a thick Natal accent ask us if “This is parking”

What a co-incidence! Terrence and Myrtle are on holidays in Ireland in their winter woolies and fleeces! There they randomly park at the titanic centre – lo and behold only to meet more Saffas! And one that proceeded to strip for them! They of course now think I have been touched by Irish madness, but it was such a great send off. Unexpected but somehow as it should have been!

So with the Belfast Marathon just at an end, people’s initial reaction was not of surprise, as there were many lycra wearing folks around, albeit that they might have looked a little more sporty, if not less drenched. But yes, I did get a couple of lads commenting on “Look what this guy is wearing!” Really – lad – my job for BodyWhys is FAR from done!

I had a young boy on in Lisburn Road ask me if I was cold and needed an umbrella (Bless), and I made a few oldies giggle outside a home where they were watching the passing parade (under a canopy).

When I hit the A1 however, many tooted encouragingly, and although the last 4 kilometres were really hard going (a lot to be said for long slow rising slopes), a day done and dusted.