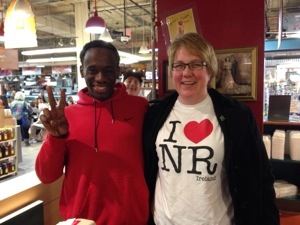 Meet Anthony Riley, one of the greatest singers in the world….

How do I know this? Because he told me, randomly, as I was dishing up my favourite Crab Salad at Tootsie’s Salad bar in Reading Market in Philadelphia after a day promoting The Sunny South East at the Philly Flower Show.

Not only did he tell me, he smiled the brightest smile, asked me would I care to listen, and before I had a chance to say anything, he leapt into the back of the stand, and came out from the prepping area – put a set of golden earphones over my head and hit play.

Anthony Riley is one of the greatest singers in the world….. How do I know this? Because I heard him sing!

His rendition of Adele’s Someone like You, accompanied magically by his friend on the piano (the same friend could be heard playing jazz at another stand in the Market) made me stand there in the middle of the bustle, and be transported to a place all my own. I was oblivious to anything or one around me, and just stood there not wanting this randomness to end.

He flogged me a CD, he asked for $10, I gave him $20 – it was worth more. I can’t wait to listen to the rest, and then – there are the cynics who will say I was played, especially when hearing that until recently he was a street singer with just a passion, and that he has been saving for ever to be able to have a professional recording done.

I say it was meant to be, like so much else in life. I met Tootsie the owner, her mad brother and spent 20 amazing minutes with amazing people that reminded me again, how often do we miss special moments in life, because we are too busy scooping crab salad?

I will be sharing as much of Anthony Riley’s music as I can – probably bootleg copies, but Anthony was just really cool with the fact that he would be heard in Ireland, and who knows where else.

Sometimes we just need to stop, look up, and share the randomness of someone else’s life – no matter how fleeting it might be.