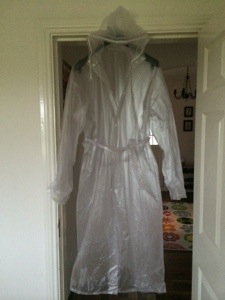 It’s official on 4 apps…. 70-80% chance of rain on Monday! Well, as a wise man once said, there is no such thing as bad weather, just the wrong clothes.

Enter the full on Transparent Mac. Belt, pockets… The works. It is now taken out and aired in advance.

I would be lying if I said I was not disappointed, as dry weather would obviously make the first day that little easier, but hey! It’s all for a good cause.

That said, keep those donations coming in… It’s now a case of wet and lost dignity for a great unsung charity that is BodyWhys Ireland, but that affects almost everyone at some level!

See the DONATE HERE! At the top of the page and Just do It!

You know I will!